Where are you:
Summer mountain » Blog » The 5 most beautiful waterfalls in the Austrian Alps to visit in the summer 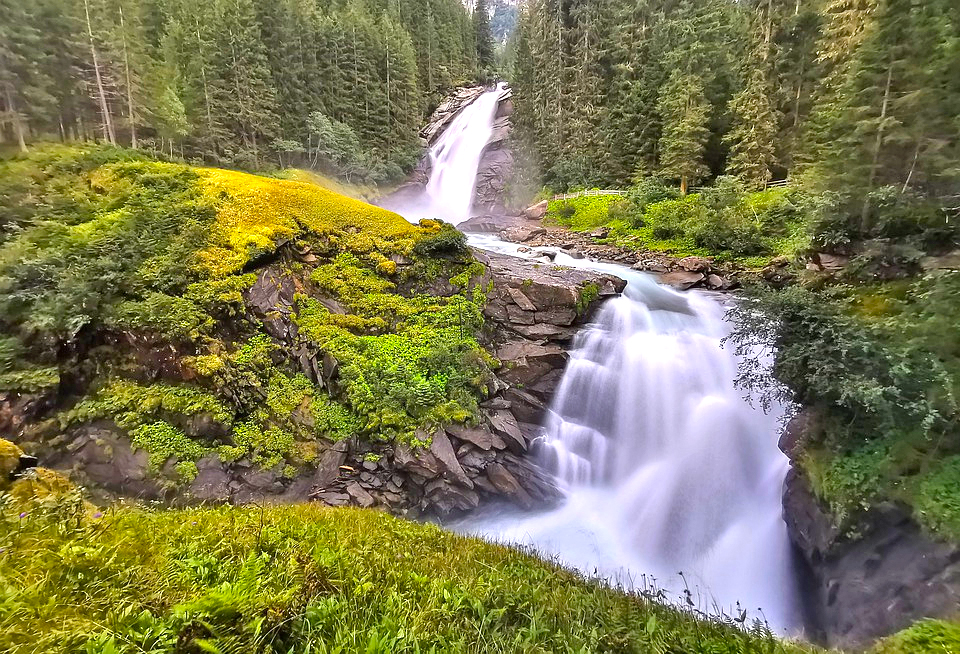 The mountains are undoubtedly one of the best possibilities for those who want to enjoy a relaxing holiday full of unforgettable experiences, in this the Austrian resorts have a lot to offer between majestic peaks, glaciers and stupendous waterfalls.

It is precisely the height of the Austrian mountains combined with the large amount of water resulting from the thaw that the area allows you to admire many natural waterfalls. Here are the 5 most beautiful waterfalls in the Austrian Alps that can be visited during the summer season.

In the Austrian Alps arise these waterfalls which are something literally wonderful. They are located inside the National Park of High Tauern and have a difference in height of about 380 meters.

It is some of the highest waterfalls in the whole of the European continent, and this contributes to making this place something magical.

The Krimml Waterfall Trail which is located in the middle of the Austrian Alps was built in 1879 and is one of the major attractions for all those who love to live an experience in direct contact with the mountains and nature.

Krimml waterfalls have also been defined as the largest and most majestic spectacle that nature offers in the province of Salzburg.

These falls feature three jumps: the superior which has a height of 140 meters, the second on 100 meters and the third exceeds 140 meters in height. A particularly suggestive scenario, even more so if you think that along the path you can stop at some panoramic points that guarantee a breathtaking view.

It is also worth considering that Krimml waterfalls are characterized by a wide variety of species of flora and fauna: just think that there are over 60 protected species of birds. This suggests that in the territory of the Austrian Alps there is one of the main natural habitats for these animals, as well as for a long series of plants typical of the area.

It is a waterfall located in the Austrian Alps and which has a 'height of over 340 meters. This waterfall has been a source of inspiration for many painters and poets: it is the right combination of nature and man, also because it passes through some panoramic points of the Bad Gastein village.

The Gasteiner Ache stream flows in total for over 340 meters, creating an effect of ionized and saturated air water spray that allows you to have a very pleasant effect.

Highly recommended for a variety of people, from those suffering from anxiety and stress, up to people with pressure or breathing problems. Above this waterfall there is also a stone bridge which was built around 1840 and a few steps from the falls a path descends, the Wasserfallweg, which leads to Badbruck.

This trail is an excellent choice for those who want to live an experience in the middle of nature. At the foot of the waterfall, on the other hand, there is a power plant which dates back to the early 900s and which was closed in 1996: since then it has been classified as a historical monument in the area. Also because today this has become a very suggestive café for tourists visiting the Bad Gasteiner Wasserfall area.

Liechtenstein Gorge it is known for being a gorge that was formed due to erosion by the water of the Grossarl stream. Accessible to the public via a very well equipped tourist route and that goes between the various walls by means of special bridges and walkways, in total safety.

An authentic spectacle that attracts the eye and, at times, could almost give the impression of frightening. The waterfall is located at the entrance to the Grossarl valley, precisely a few kilometers from St. Johann. No doubt this is it one of the best routes for families, but also for all those who want to experience the beauty of a holiday in contact with nature.

The path that passes through this waterfall it is about a kilometer long and is a very easy walk. Then there are ups and downs, within everyone's reach, until you can go inside the rock itself.

A very suggestive place where the waters flow in a particularly impetuous and vehement way: if you remain silent you have the opportunity to listen to the sound of nature, something really exciting.

Furthermore, it is good to remember that in the path there are two bridges from which you can admire the entire course of the river, as well as being able take some wonderful souvenir photos of the waterfall.

On the sunniest days, here you can enjoy an exceptional, very relaxing and pleasant refreshment. Instead, in the final part you can find benches where you can rest in the name of an atmosphere that will hardly be found anywhere else.

This is one of the best places for families and for all those who want to spend a holiday immersed in an exclusive mountain landscape. A'short excursion and in any case affordable of all that will allow you to be in direct contact with the most beautiful and exciting nature.

When talking about the most beautiful and worth seeing waterfalls in the Austrian Alps area, one cannot help but mention the Grawa Wasserfall.

They are located in the back of the Stubaital valley, about fifteen kilometers from Neustift e just one kilometer from the Glacier Stubai. A very fascinating natural spectacle that is suitable for many people, from groups to families.

The water of the Sulzbach stream plunges in depth for over 100 meters, therefore a very suggestive waterfall. This waterfall was declared natural monument in 1979, also because it is one of the most beautiful in the Eastern Alps.

The Grawa Waterfall is located near the hut from which it takes its name, reachable by car. Own from here you can enjoy the spectacular view of the entire waterfall.

The walk that can be done lasts a quarter of an hour and you reach a dedicated one viewing platform from which the view of the waterfall is truly exciting. The splashes of cool water will be a cure-all, especially on the hottest days of summer.

The path, however, may not be the simplest: once you get to the platform, however, thanks to the magnificent view that opens before your eyes, you will be able to be totally rewarded for the efforts made.

Those who choose to discover this fantastic place could also make a stop at Stubaier WildeWasserPark. Such an itinerary is dedicated to those who love water and want to admire the imposing waterfalls, as well as springs and a series of lakes in the valley.

This is the right place for those who want to be in contact with nature, admiring something incredible and that man could never be able to emulate.

La Gollinger wasserfall it is one of the most important waterfalls in the whole territory of the Tyrol: have a height of over 150 meters and two levels.

A particularly suggestive place and which is the right destination for all those who love the mountains and want to live an experience in contact with the most uncontaminated nature there is.

The name is no coincidence: literally stands for dusty waterfall, and this is due to the fact that immense clouds of water are created when the water falls. A noisy natural spectacle that will give tourists an incredible pleasure.

A history that dates back over 9000 years ago, when boulders of rock from a large landslide ended up blocking the Horlachbach stream in Niederthai. At that point, the water had to adapt to the new conformation of the territory and thus find a new way to be able to flow. Thus one of the most famous natural attractions of the whole was formed Tyrol and the area of ​​the Austrian Alps.

It is worth considering that, over the years, stairs and paths have been built as well allow you to walk a few centimeters from the waterfall.

Over 700 steps and an 80-meter bridge that contributes to giving a natural spectacle that leaves you speechless. Many choose to stop here even at night: in summer, every Wednesday evening it is illuminated just to give a dream view.

The best offers in the mountains in summer, in hotels, bed and breakfasts or holiday apartments

The best offers in the mountains in summer, in hotels, bed and breakfasts or holiday apartments

Summer tips in the mountains